E Pluribus Unum - Out of Many, One - Superior Credit Union
Skip to main content

E Pluribus Unum - Out of Many, One

Can you imagine 10 to 15 of your co-workers saving money and borrowing from each other? This is how our credit union originally began. Each week on payday at Lima’s Superior Coach Corporation, co-workers signed up new members and collected a few dollars from each. When a co-worker at the funeral coach & bus manufacturer needed a loan, the savings fund would loan dollars to the borrower. In return, the borrower paid interest on the loan and dividends back to the savers. By design, the members were sharing their money with each other at aff ordable prices. All of this occurred in the cooperative spirit, believing that people could achieve a better standard of living by pooling their savings and making loans directly to their neighbors and co-workers.

What our members did over 60 years ago would be nearly impossible today. Regulations and technology costs make starting a new credit union cost-prohibitive. But, during the mid-1900’s, credit unions popped up all across the United States. Credit unions grew rapidly to the point that by 1980, over 20,000 credit unions served employee groups, associations, and communities across America. In Ohio, credit unions had unique names with many named after the select employee group that started them. Lima area credit unions were named B&O, Member 1, Utelco, Circle Diamond, Randall Graphite, Duff, Superior Coach, Northstar, Habion, New Idea, Teamsters 908, and Ottoville St Mary’s Parish. In Fostoria, Autolite employees formed First Ohio. In Toledo, employees of Owens-Illinois formed Great Lakes CU and Toledo CO-OP CU serviced local cooperatives. Credit unions like CINCO and Classic served public employees in the Greater Cincinnati area, including the University of Cincinnati, City of Cincinnati, and Clermont County teachers. Although each credit union was unique, all of these credit unions shared a common mission of serving their members with affordable financial services. 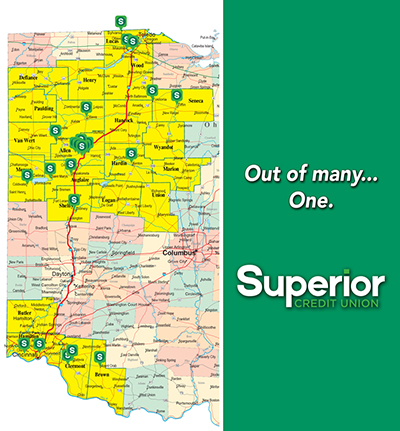 All of the credit unions mentioned above now share another commonality. Each of these credit unions – across villages, towns, and cities such as Toledo, Fostoria, Tiffiin, Coldwater, Lima, Amelia, and Cincinnati – now make up Superior Credit Union. Like the Latin phrase, E pluribus unum… Out of Many, One, all of these credit unions have come together and are united in the common goal of providing affordable financial services to their members. Although we each have unique histories, we are now one credit union. Just as those 10-15 co-workers pooled their resources together 60 years ago, we as credit unions have pooled resources together to provide our members with the best financial products and services. Now with over 90,000 members, our staff is united in their goal to serve you.

As we prepare for tomorrow, Superior is committed to providing our members great pricing and the best access to aff ordable financial services. Whether members are using online and mobile banking, live chat, or visiting a neighborhood branch, Superior will be there. Our staff is ready to serve you while providing the best financial advice. We are committed to working in your best interest.

On behalf of the Board of Directors, Management Team, and Staff, thank you for being a Superior Member. We are all ONE working for YOU!!!

What members say about our accounts

What members say about our loans

What members say about us

What members say about us